For a long time I’ve mused over a straightforward question with a not so straightforward answer: who used to live here? Specifically, who were the very first tenants of my average three-unit condo building on Chicago’s Far North Side? 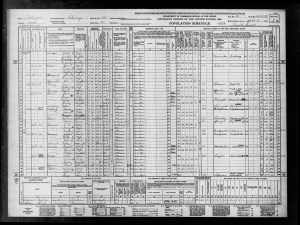 When my partner and I first purchased the condo, we were told that it was built in 1918. It is easy to verify this through the Cook County Assessor’s Office.  I also knew that I could answer this question through United States Census Records.

U.S. Census records from before 1940 are publicly available and, depending on the source, free to use. There are a plethora of options including Ancestry.com, the New York Public Library, FamilySearch.org, and the National Archives to name a few. Some, like Ancestry, require a paid subscription to access their files. Others, like the New York Public Library, are free to the public but are limited by their geographic scope or archive of materials. What one finds is that some sites work better than others and all of them are clearly designed with genealogists in mind. This is to say that these sites very easily allow researchers to track people by name, but make it very difficult to search by, or track, a historical location.

While the aforementioned resources may lead to the same Census records, most suffer from flaws in search design or website maintenance–for example I encountered frequent server issues on Ancestry.com. For my purposes, FamilySearch.org, was the only website that offered free access without glitches.

The key to tracking a historical location is to first know your location’s Enumeration District (ED)–for each Census. Enumeration Districts are subdivisions based upon population. These were and are still used by Census workers across the United States to portion a neighborhood into discrete sections that could be pragmatically recorded in a single day. Most importantly, districts maps changed for each census. Therefore one block’s 1920 census number might be very different from the 1930 census and so forth.

In Chicago, for example, any of the city’s community areas might be divided into a dozen or more EDs. Crucially, this source provides the likely enumeration district for any given address. You can also find location sources through the National Archives.

My street marks the boundary of several enumeration districts, meaning that my street name appears in a dozen or more folders with between forty and seventy page images a piece. To narrow my search further, I had to see how these EDs were drawn on a map. Luckily these maps show exactly where your house was located.

In my case, I knew that because my house was on the north side of the street it would be in the ED to the north, #1420. With the specific number in hand, I could find the census file that corresponded to my block.

Finally you’ll have arrived at a digitized scan of the actual census record for your neighborhood. The hand writing can be tricky, so keep in mind to look at the far left margin for the street name. The first column is the house number for that street. From here, hunt through the image pages until you find your home. No luck? Go back to your other EDs, or, the historical maps, and keep searching. 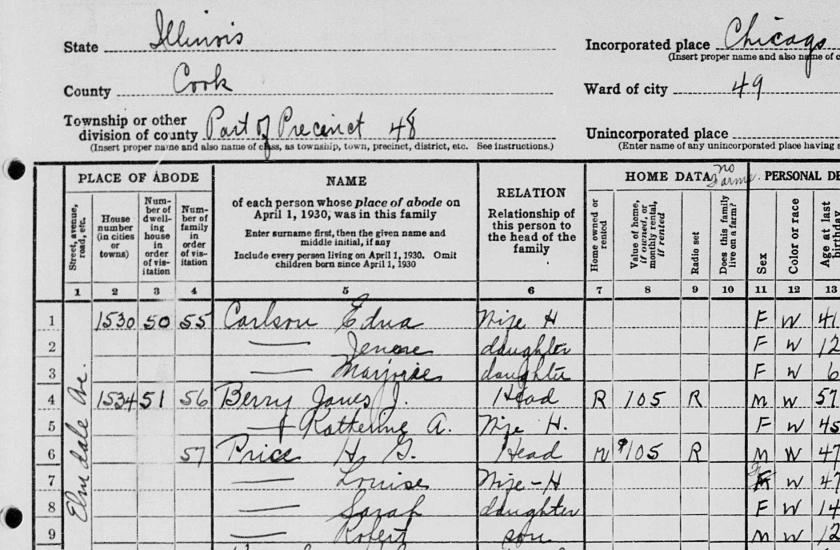 Even the best search can fail when the information, in question, was never recorded in the first place. In my case, after searching through almost 700 pages of images, I’ve come to the conclusion that my apartment was likely overlooked in the 1920 census. This would not be surprising as I know, from historical records, that there were only two buildings on my block at the time. It would have been easy to overlook.

I did, however, find information from the 1930 census. At the time two families of Swedish immigrants lived in my building–a very typical story for my Chicago neighborhood. The first were Johan (John) and Emma Widerquist. Through a family genealogy page I found that Johan was born in Verda, Sweden and immigrated to the United States with his wife in 1881. Johan had worked as a machinist at the Huskvarna Arms factory in Sweden before joining the Union Special Sewing Machine Company on Chicago’s Near North Side. The two would eventually have eleven children—three of which who died in childhood. In 1930 they lived with their son, Reuben Widerquist, and their daughter, Helen Hannibal. Helen likely lived in a separate unit with her son Lester Hannibal.

The third unit was occupied by the Erik Carlson, his wife Edna, and their children Jenene and Marjorie. 41 years old at the time, Erik Carlson emigrated from Sweden when he was only a small child (1891) and now worked as a salesman for a motion picture company.

There you have it, some useless information in recompense for your archival geek fest.